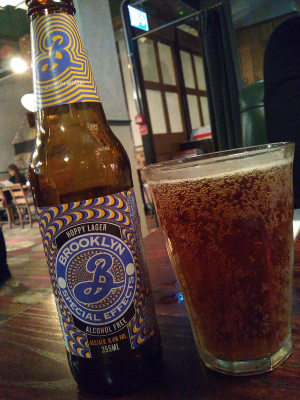 Brooklyn Made Me Happy With Their Hoppy Lager

A rare night out with friends. Miles from home and with the prospect of a long drive at the end of the night I scoured the menu in Byron. Surely they'll have a non-alcoholic beer, I thought. Yes! There it is. And one I've yet to try. This night is getting of to a good start!

It wasn't clearly labelled as a NAB on the menu and in retrospect I think this is a good thing. We want non-alcoholic beers to become mainstream, right? So highlighting the fact that you're about to order something with only 0.4% alcohol content is perhaps not a great plan. Instead, in amongst their other beers (which is a pretty good selection, it has to be said), Brooklyn Special Effects sits quietly, hoping to be picked. And for the sake of the NAB market, I hope a fair few regular beer drinkers order it by mistake - they won't be disappointed.

Yes, it's a bit murky in the glass - a kind of dark straw colour and not particularly appealing. But looks can be deceiving. I think this beer has been designed purposefully as a bit of a 'catch-all'. It's hoppy so the modern IPA fans will be pleased, it's called 'lager' so those looking for something familiar will know it's a safe bet, and yet I'd say it was definitely more of an ale than a lager - so your dad probably won't mind giving it a go either.

I should say, I was enjoying mine along with a decent burger and good company - so perhaps my appraisal is a little clouded. This is a review based on my experience and perhaps if I tried it at home I maybe wouldn't score it the same. But I'm confident it wouldn't be wildly different. This is a great beer. I'd have happily gone for another, if time allowed, and wasn't at all disappointed that I'd 'had' to choose a NAB over a normal beer given the driving. I'd heard good things about this, but had yet to find it stocked locally to me - but I'll definitely be seeking some out in the future. There was nothing obvious to me that this was NAB, no weird aftertaste, and I have to say I didn't notice the aroma the official drinkNAB review mentions above.

For me, this was an easy drinking beer. Whether it's a lager, an IPA, a more traditional ale, make of it what you will - forget the labels for a few minutes and just enjoy!