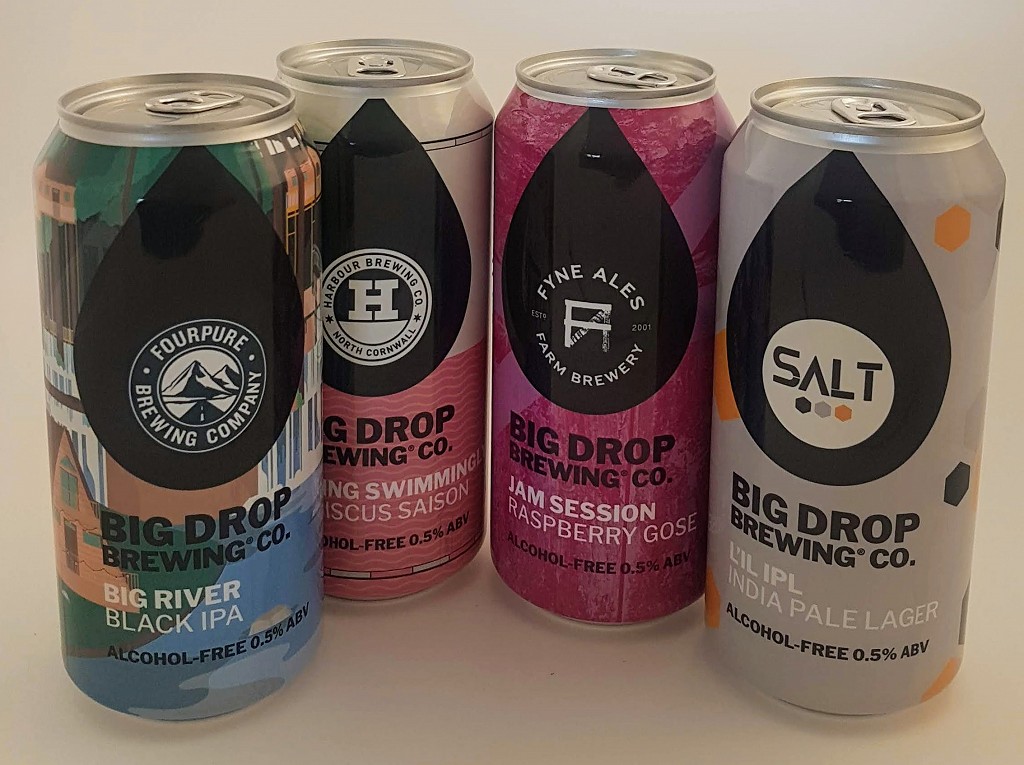 An exciting day today as I head down on the train to King’s Cross in London to the Big Drop Brewing Company launch of four…yes FOUR…new 0.5% beers. They have eight already on the market which means…wait, let’s do the math…they have twelve available. Melissa Cole, author of The Beer Kitchen: The art and science of cooking and pairing with beer will be co-hosting and leading us through the food pairings.

My first impressions of the company itself have been very favourable. Nick has gotten back to my queries very quickly and the invite to the launch was very much appreciated. Let’s hope the beer matches the PR!

The event is held in Caravan, a modern venue which, judging by the high percentage of hipster beards present on staff, suits the company to a T. There is a buzz in the air that only gets bigger as the place fills with clientele. I’m directed towards the rear where Big Drop staff are liberally pouring samples and answering questions. Big Drop’s recent recruitment drive has clearly attracted some knowledgeable talent with a passion for the craft.

Today is the launch of the World Collab 1 collection. Each brewed as one-offs in a batch of 32000 litres, these are not going to be around forever! As with all Big Drop Beers, they are developed in a well-equipped shed in the UK by their genius brewer, and then contracted out to specialty small breweries around the country. I was initially skeptical of this – I remember the first time I discovered that Kingfisher wasn’t made in Bangalore but in Kent and, illusion shattered, nearly dropped my poppadum. However, this makes perfect sense when you think about it and ensures the sustainability of the industry. Thinking adjusted. Move on.

Whilst this was a food pairing event, I deliberately left any morsel sampling until last as the chances of my readers having the same food available at the exact moment they have the beer is unlikely. The food was awesome though!

I sampled eight beers this morning. All eight beers are reviewed on the site, but I’ll include the World Collab ones below.

An original brew, brewed in partnership with the SALT brewery based in Saltaire. Malt and zesty hops are blended perfectly to create an exciting, slightly clinical but familiar aroma. It is refreshing in the mouth without being overbearing and it’s very hard to put down.

Brewed in collaboration with the Harbour Brewing Company in North Cornwall, this unusual brew is definitely worth a try. The wonderful pinky, coppery colour holds a delicate Hibiscus taste with a dry feel. I think I was expecting something along the lines of a pressé, but this is most definitely still a beer. Personally, a tad more body would have helped confirm this, but as a summer drink with a difference, this is very refreshing.

This made me smile. In fact, I couldn’t stop beaming and the photographer kept snapping shots of me – clearly this wasn’t due to my superman physique. Thank you Big Drop and Fyne Ales Farm Brewery for this work of art. Salty and sharp with a grainy tint, the first thing that gets you is the pinch of freshly picked raspberry in the aroma. A very stable, well balanced, sourness combines with a nice but not overpowering dryness leaves you feeling content, and the gentle fizz ensures you can focus on the taste. It would be a shame if this didn’t go into full scale production.

Big Drop Brewing Co. and Four Pure Brewing Co. teamed up for this one. Aroma of a stout with Chinook hoppy ale getting in there too. Don’t let the hops fool you into thinking light IPA though – after the initial hoppy tang, the taste gets a whole lot more complex. With so many flavours, it is difficult to know how to start describing it – chocolate, coffee, sweet pineapple, ancient forest - I anticipate some interesting reviews for this. After you get used the initial striking aroma, a the rich flavours combine to give robust sustenance that stout drinkers so enjoy.

Suffice to say, there is a sense of sadness when one realises that once this batch is gone, and go quickly it will, some or all of these may never be made again. On the plus side, there is always World Collab 2 to look forward to!