Reviews of Non-Alcoholic and Low-Alcohol Drinks from Bavaria

Bavaria 0.0% Original has a distinct beer character: with a slightly hop-like and malt aroma, a full body, and a grainy and sweet flavour from the sugars in the barley Malt that beautifully balance the bitter tones of the beer. To make ours alcohol-free, we use a patented technique that guarantees no alcohol is ever formed during the brewing process, making Bavaria 0.0% Original a true alcohol-free beer.

Cheaper than coca-cola or bottled water, this doesn’t attempt to be anything other than than a no frills brew, reminiscent of those small, stubby bottles that quench without fuss. It’s an ‘end of a day’, ‘crack one open’, uncomplicated sort of drink. Some may find it a little sweet, some a bit too blue collar - but this is a ‘it is what it is’ drink and this independent brewery are doing rather well out of me as a pack of 8 always seem to end up in my shopping trolley at the supermarket. I haven't yet delved into their various fruity or wheat beers, but look forwad to trying them soon. 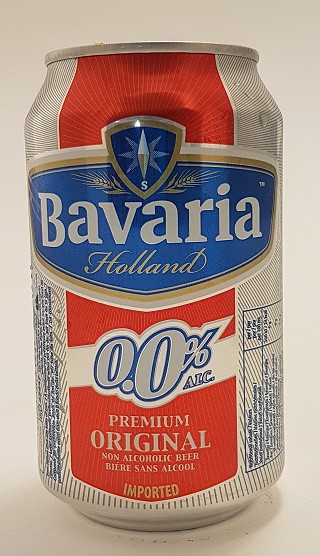