Reviews of Non-Alcoholic and Low-Alcohol Drinks from Schneider

The label states (according to my A-Level German), 'From Bayern's Oldest Wheat Beer Brewery'. I haven't tasted Schneider Weisse beer before, so didn't have any preconceptions. However, I have tried a few alcohol-free wheat beers, so I had a rough idea about what to expect. As I poured the contents of the bottle into a glass, quite a substantial head formed, and the beer below was a dark straw colour. It's translucent, but a fairly robust colour and quite cloudy (which is no surprise for a wheat beer).

The head settled down, reducing to a thin layer of bubbly foam over the next few minutes. The aroma is quite malty, which is also one the most obvious flavours I detected. Of course, wheat flavours and aromas are also present - but they're not overpowering. Schneider Weisse feels like a proper beer in the mouth - slightly fizzy, but not like a gassy lager. More like a quality ale with a few bubbles present. I'd say the fizziness definitely lifts it - I expect it'd be a bit drab without.

The malty flavour is the most obvious, there's also a sweetness which lingers and a slight bitterness. I really like the label design, there's a hint to the tradition of the brewery in their wheat inspired logo. Paired with some great font choices and a strong blue, white and red colour scheme it definitely stands out on the shelf. The Germans really know what they're doing when it comes to top-fermented wheat beer. And this brand is no exception. I'd really recommend this beer to anyone who's looking to try some quality German beers - whether alcoholic or not. It's really drinkable, looks and feels just like an alcoholic beer and there's more malt than wheat, meaning it'll probably appeal to those used to drinking English style ales, like St Peter's Without. 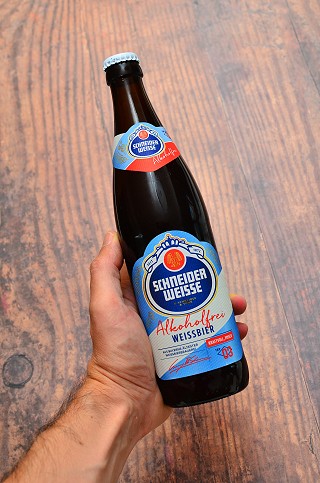